BBIX, Inc. (“BBIX”), the Internet exchange (IX) business arm of the SoftBank Group, today announced the launch of a new IX point “BBIX Tokyo 6” that will start operations in April 2017.


Maruyama CLS is in the middle of the Great Circle Route between Asia and the West Coast of the United States, a path that marks the shortest distance between these locations. Against this background, Maruyama CLS has a geographically unique position that has made it one of the major facility hubs for international submarine cable systems. Because there are no IX points at Maruyama CLS, almost all Internet providers based in Asia are forced to use IX points in Hong Kong or the West Coast of the United States across the Pacific Ocean despite the optimal location of Maruyama CLS. Now BBIX is arranging multiple 100Gbps circuits to connect “BBIX Tokyo 6” with five other IX points operated by BBIX*. Furthermore, customers who connect to “BBIX Tokyo 6” will be able to achieve direct connectivity with more than 100 other operators who connect to BBIX at one of five other IX points in the Tokyo Metro area without having to worry about higher backhaul costs.
*“BBIX Tokyo 1”, “BBIX Tokyo 2”, “BBIX Tokyo 3”, “BBIX Tokyo 4”, “BBIX Tokyo 5”


BBIX aims to contribute to customers’ business development between East Asia and the United States, and to the growth of Tokyo and Japan as a major international telecommunication hub. 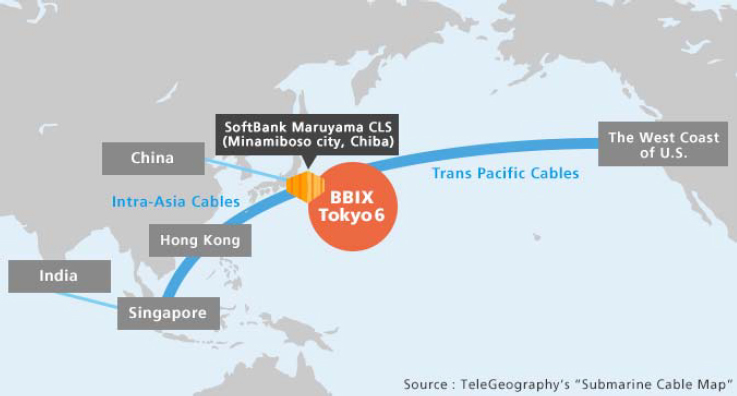 
– Service names listed in this press release are trademarks or registered trademarks of their respective companies.